When Grand Fir Brewing opens to the public this Friday, November 18th it marks the culmination of two creative personalities and individual visions that metamorphasized into one. Whitney Burnside and Doug Adams both made their mark in their respective fields of brewing and culinary arts many years ago (Burnside with Pelican Brewing, Elysian, and 10 Barrel, Adams with Bullard, The Woodsman, and Paley’s Place), before they had ever met, got married, and had a kid. Until now, they had never worked together or fully owned/operated and controlled their fortunes. Grand Fir Brewing is a test, as well as a milestone not only in their careers but their relationship.

Abies grandis, aka Grand Fir, is native to the northwest fir tree that spreads from southern British Columbia down the Columbia River to California and east to the Cascade Mountains. The brewery takes their name from the old growth fir in the building roof and floor which was partially removed to install the sunken 15bbl brewhouse for the spaces former tenants West Coast Grocery brewing. The brewpub itself is modern, with a ground floor seating area, and an upstairs loft where the bar, kitchen, and additional seating looks down upon the production brewery in the open basement level with floor to ceiling glass front with a view too the neighborhood and local businesses Meat Cheese Bread, Beer, and Sunee Thai & Lao Kitchen.

The unique layout of the space makes for a fun but limiting seating arrangements, great for groups who don’t feel like being near the bar. But the mezzanine pub area is the highlight, with the heavily wooded benches and ferns giving a lush, green, pacific northwest forest vibe with a sense of place.

Chef Doug Adams, gained a reputation as a high-end fine dining chef, but for anyone who followed his career and his signature dishes it has been clear his heart was in the more approachable fireside cooking he grew up with in Montana and Texas. As one of Portland’s premiere new chef/owner entrepreneurs after a stint on Bravo TV’s Top Chef he opened Bullard in downtown Portland’s new Woodlark Hotel, he made elevated and pricey tex-mex at the top of the game. At Grand Fir Brewing he is bringing the fare back to the roots of inspired homecooking that got him into the industry to begin with. 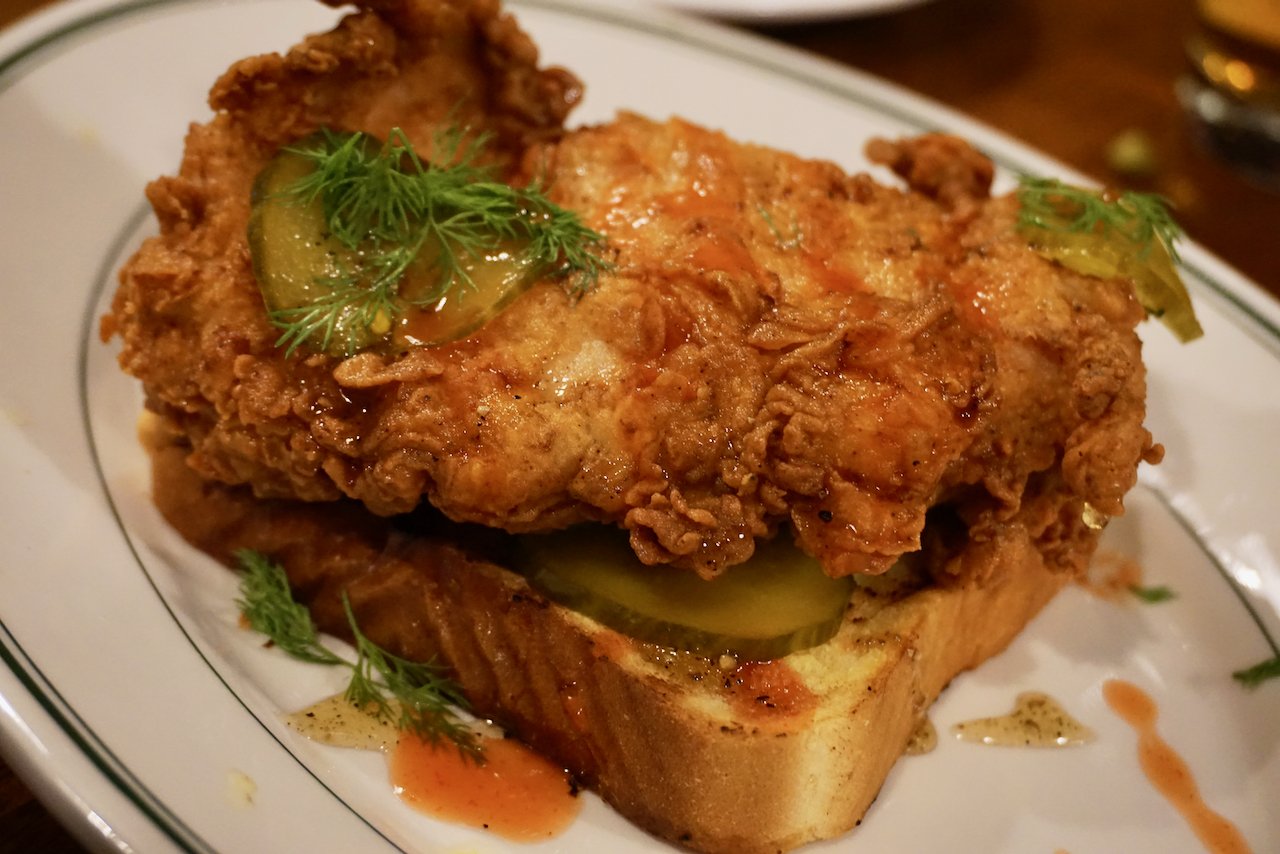 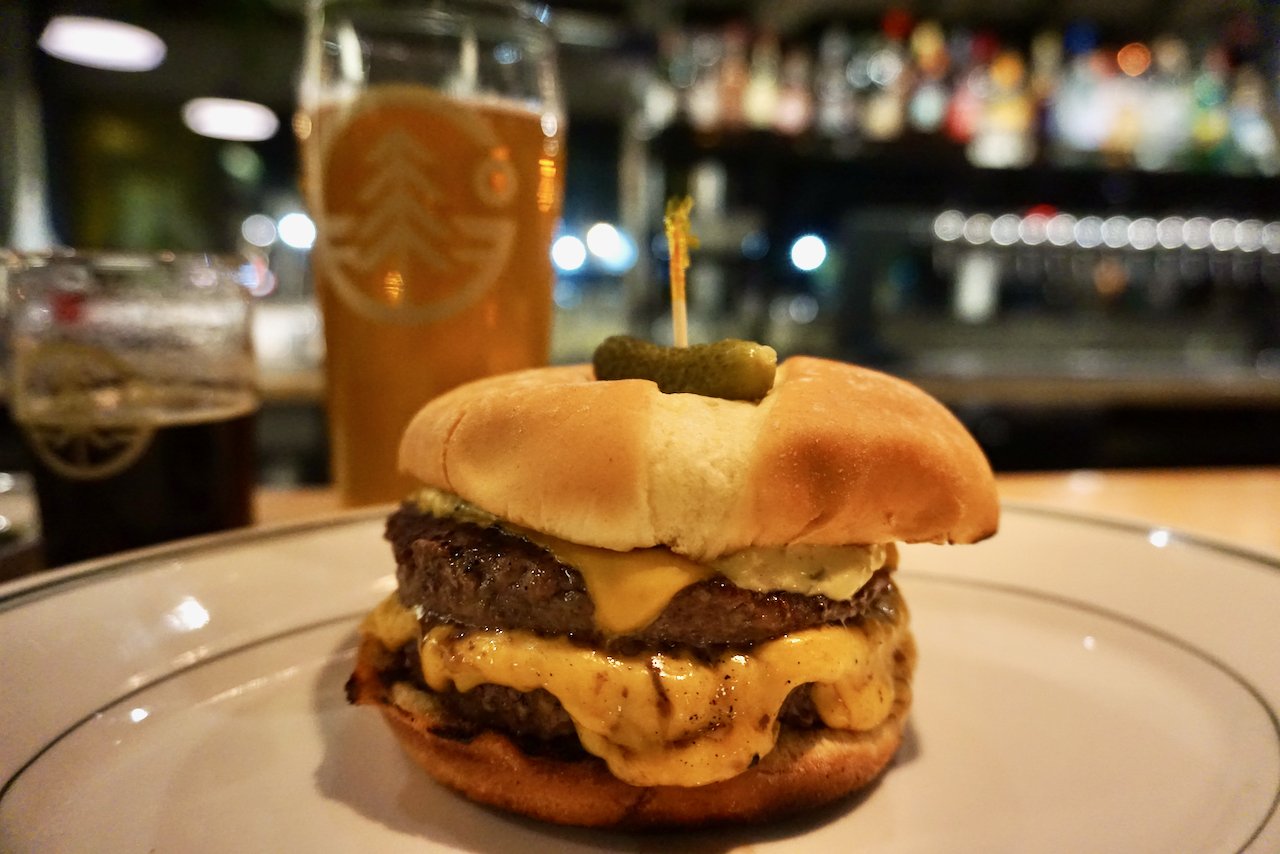 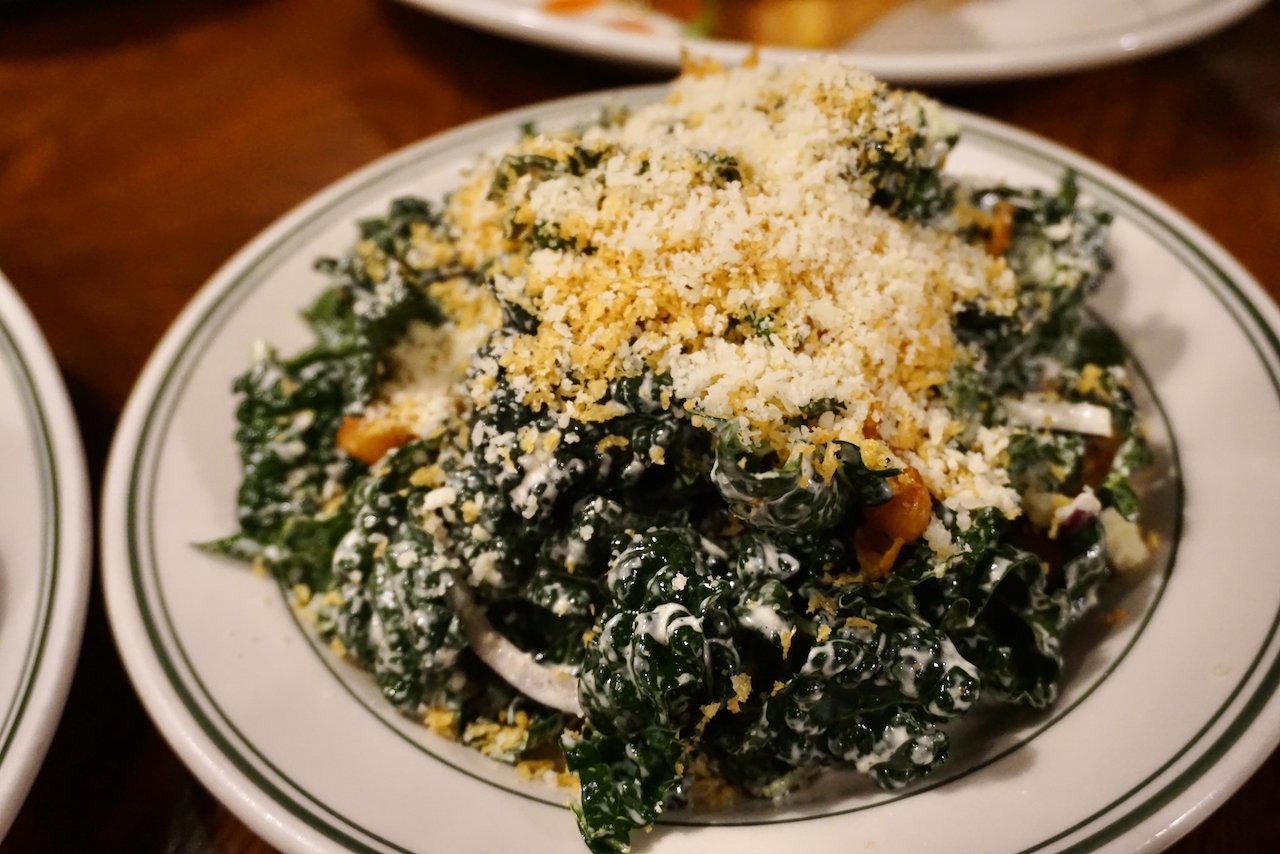 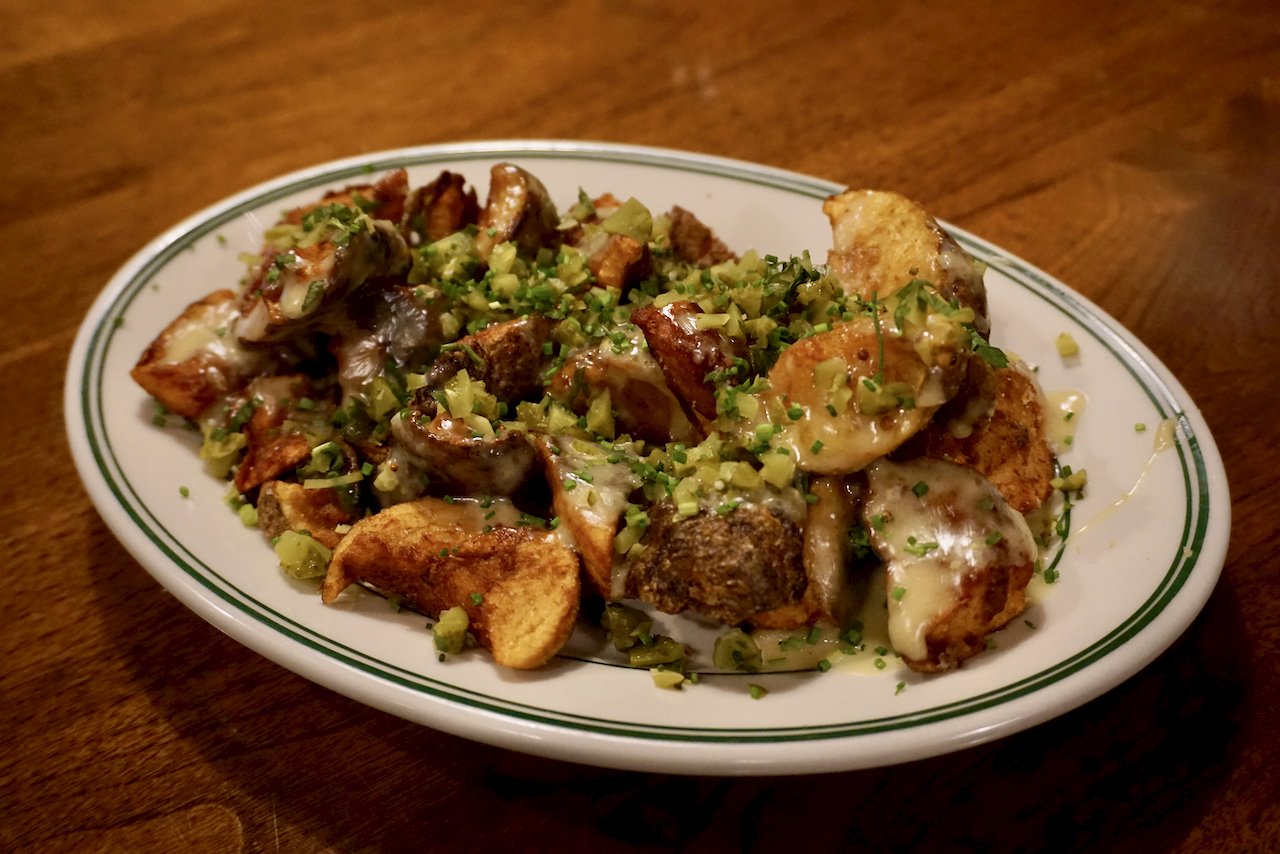 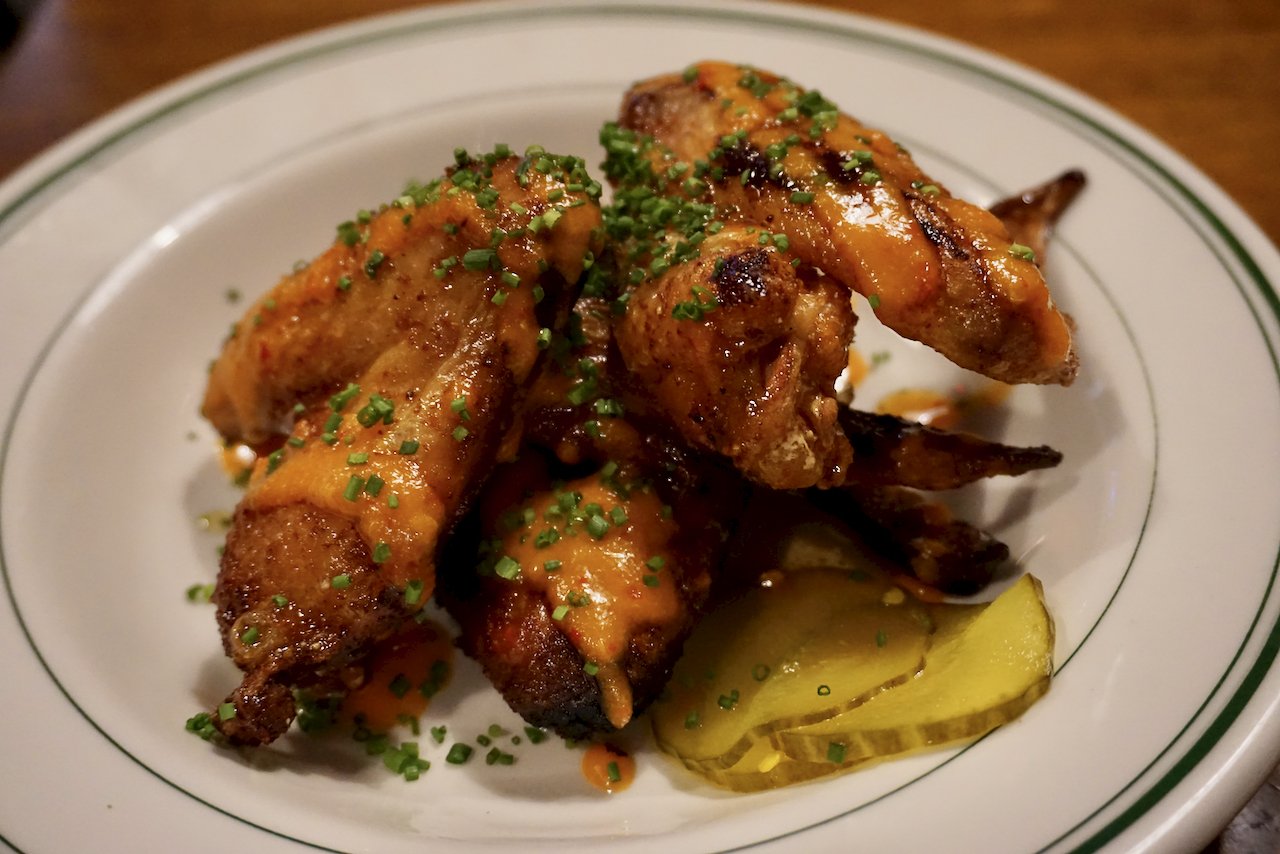 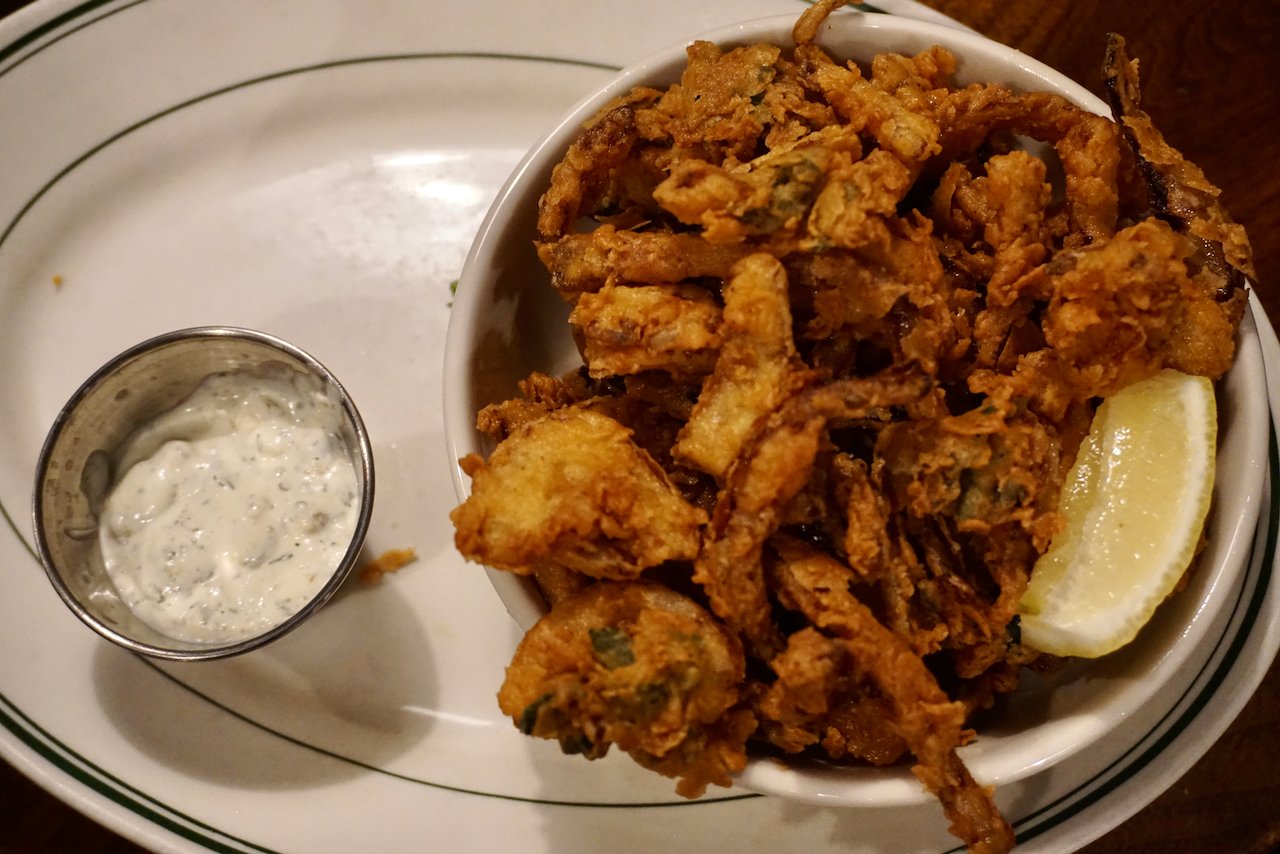 Grand Fir Brewing’s food is recognizable to the average brewpub goer, but often surprises with out-of-the-box takes on the common dishes and more careful renditions of key ingredients. Your average brewery fan will be satisfied with the double burger, a double patty take on a fast food-style cheeseburger with gooey cheese that sticks the beef and buns together like superglue cut with stout braised savory-sweet onions and secret sauce. Items that seem like they may be a little more fine dining like the anchovies are actually fried and breaded in a way that is reminiscent of shaved onion rings or calamari that make for great shareable finger food. Salads are far from the basic veggie and croutons of similar establishments, instead balancing crunchy crisp veggies with rich dressings and toasted crunchy garnish that makes for a delightful experience on each bite.

Of course Adams is going to do his famed fried chicken, it’s a protein group that he has become known for over stints at multiple restaurants. At Grand Fir it’s served in a buttery breaded shell on top of thick slices of texas toast, drizzled with honey and doused with hot sauce, the housemade spicy bread & butter pickle slices are the final kiss that make this so satisfying, though I recommend ordering an extra side of them for $3. Wings are another of Adams signatures, here they are calabrian chili rubbed, smoked, and then served crunchy with a sticky black pepper honey on top. This is pub-inspired menu that wants to be satisfying and approachable first, eye opening and palate expanding second, and is capable of both. With richness of offerings and minimalist platings and pricing, Grand Fir’s food menu begs the patrons to have another and another, each requiring a food friendly beer to cut the salt and fat.

Whitney Burnside has opened the Grand Fir Brewing taplist with a series of throwback collaborations that set the beverages apart from the more fruity, higher AbV, and polished beers she made at 10 Barrel Brewing. Unfiltered and raw, the ales and lager are approachable and drinkable first and foremost. Styles and brewing traditions that are thoughtful in how to require the least thought to be enjoyed. There is a lot to be said about casual beers that dont slap you in the face with the latest trendy hops or norwegian yeast, beers with body and balance that are most at home with something like Doug Adams Raclette beer-cheese Alpine potatoes.

Grand Fir Brewing is young, but the Old Growth Pale Ale is the best of the opening draft list as the clearest, crispest beer so far with classic, evergreen, candied lemon and pine, coming off a lightly malty base. Heartwood Stout, is the other standout, an Export-style with strong notes of espresso and chocolate but it’s not especially sweet, nor especially dry or hoppy, but full, creamy and balanced. Tack Shack East Texas Lager might be the best food beer, this Czech-style amber lager is inspired by Adams Texas Roots and the classic Shiner Bock, but it’s more malty and rich than that beer and served in a dimpled mug at Grand Fir. In the future we look forward to more lagers and Belgian-styles from Burnside who has proven her skills with World Beer Cup winning recipes for Pelican’s Queen of Hearts saison and Pelicano Extra Mexican-style Lager to name a few.

The bar is full service, with a solid but just knee deep well of liquor and specialty spirits for basic and sophisticated cocktails. The cocktail menu is spearheaded by Eugene Doherty, formerly of The Wythe Hotel and Diner in Brooklyn. The drinks are heavily whiskey based, owing do Adam’s Texas BBQ background: That Smoke, is a rye whiskey cocktailand Lapsang Souchong-infused vermouth, and Rusty’s Irish Whip, with whiskey, lime juice, and celery bitters. If you prefer a drink with more acid, you may enjoy the Savory Mar, with Lunazul reposado tequila, jalapeño + tarragon triple sec, fresh lime, agave, smoked salt rim, lime wheel. Wine drinkers can expect west coast pours from Eric Wareheim’s Las Jaras, Evening Land Vineyards, and others.

Chef Doug Adams has focused on elevated pedestrian fare for the main Grand Fir menu, but plans to launch a Supper Club ticketed dinner series soon, where he will cut loose with more experimental and high-end meals served in the intimate below ground barrel room adjacent to the brewery. The Grand Fir Supper Club will feature guest chefs on a monthly basis starting in January 2023.

Grand Fir Brewing is opened for temporary limited hours from 3pm to 10 pm weekdays, and Friday & Saturday from 3pm to 11pm. They plan to add lunch service soon, and in the new year will serve weekend brunch at the pub located at 1403 SE Stark St, Portland, OR 97214.